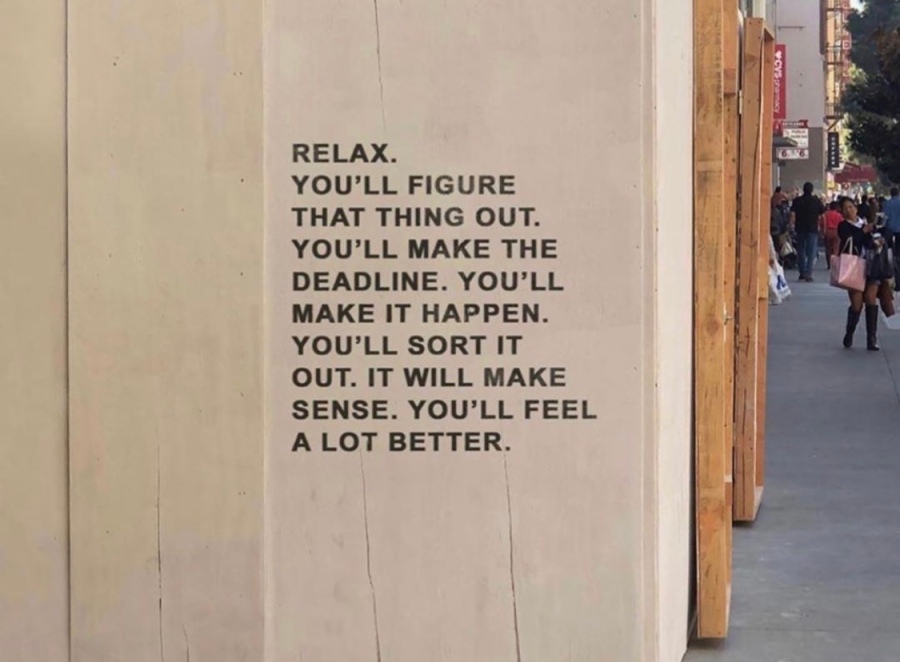 A question that either puts you at ease or pushes you off the ledge.

I’m currently writing this, a week behind on my two-posts-a-week blog roll, trying to get back to normalcy. I know that doesn’t sound like a big deal and it truly isn’t. But when your brain won’t shut up about it and your heart rate won’t dip below 90 bpm for a whole week, you kind of need to address it.

What was originally an email to my professor, Gary Kayye, is now a post for everyone to see. I thought it would be a disservice to the people that are probably feeling the same way I am if I didn’t share.

I mentioned to you at the end of class that I was falling behind on my blogs because I’ve been having “a bad week” and you asked why. I didn’t get into details because I really didn’t know how to form the right words. I didn’t know why. But I knew if I tried to express it to you right there, I would end up crying in front of the entire class and I didn’t really need that reputation.

After a couple of days of reflection, and a few midnight panic attacks, I figured out why I was suddenly falling behind on this assignment. I’m terrified. I’ve fallen into the void of imposter syndrome and as the rejection emails from potential jobs come rolling in (or not depending on whether they’re ghosting me) I’ve started to breakdown. Out of nowhere the thought of having to make those next steps has torn me apart.

It’s weird though, and I think that’s why it’s throwing me so off-balance. I’ve never been worried about “what comes next”. In fact, for most of this year, I’ve been excited about graduation and the next phase of my life. But all of a sudden, the other night I completely broke down because I have no idea where to go from here. I’m feeling as if every thought I have is superficial, that every post I attempt to write will lack substance. I wanted to write about being a student but couldn’t find anything relevant to say. I wanted to write about the advertising industry but felt inadequate to do so. I wanted to write about politics again but didn’t feel my words would matter.

In short: it’s been really hard and I wanted to let this be known because I’m also terrified of disappointing people. You challenged us with writing two posts a week and every time I opened up my laptop, I couldn’t find anything interesting to say. It definitely wasn’t from a lack of trying, but it suddenly became easier to hide in bed than to face the reality of everything. I felt the sting of failure as I knew there were other people in class struggling to create content and here I was wallowing in self-pity.

You gave us a week off from writing for spring break so I’m planning on using this time to catch up. I’m hoping this break will allow me to breathe a little, let me get out of my own head, and get me back on track. I wanted to let you know of all of this because my anxious brain wouldn’t shut up about it. Thank you for your understanding.

I’m still struggling with the idea that my mental health is important and that expressing my issues and asking for understanding is okay. It’s still very taboo in our society to say “I’m not okay.” I still feel like I have to be invincible and when I’m feeling “off” I equate that to weakness. It’s a terrible way to think, I know.

I’m not looking for pity or a “thank you for sharing” because this struggle isn’t unique to me. I know that so many people are feeling this way. Whether they have plans after graduation or not, everyone is feeling weary about their next steps. Everyone is under some sort of pressure from school or work or both. Everyone can relate to feeling sad and out-of-touch from everything around them.

But in the spirit of “it’s okay to not be okay”, here is the playlist I listened to as I sat in bed and stared at the ceiling. I know that sounds terribly depressing and that’s because it is. It’s the reality of it all. But now, as the sun is starting to shine a little brighter and the clouds are beginning to dissipate, I can listen to these songs under a new mindset.